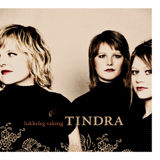 The three young women of Tindra provide innovative renditions of the tunes of their ancestors, as well as crafting their own songs, powered by strong West Norwegian traditions and a clear view of modern musical styles. Listen to the words of Petter Dass, Ragnar Hovland and Åshild’s grandmother! It’s no ordinary, everyday occurrence for the big thrush to fall in love, or for all things to perish. At least not in settings as tuneful as these" / Gabriel Fliflet - producer.

Tindra’s music encompasses their own arrangements of traditional tunes as well as original material within the folk music idiom, incorporating poems by Jan Magnus Bruheim and Ragnar Hovland, among others. Topics include goats, suitors, a lovesick thrush and praise for a mountain.

Since its formation in 2000 Tindra has developed a varied repertoire, as witnessed on this debut recording. Since completing their music studies in 2004, Tindra’s activity has increased substantially. They won the Kvarts award for 2005 and made the finals in the Intro-Folk competition 2005. At the same time, the members have progressed from arranging traditional tunes to writing their own. In 2005, Kvernberg won TONO’s first-ever Edvard award in the folk music genre with her composition Då kom du, parts of which appear in the Tindra repertoire along with several other new pieces by members of the trio.