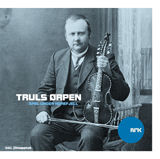 Truls Ørpen was born in Krødsherad on March 27, 1880 and died at Modum on March 28, 1958. He ran the farm Ørpen for 46 years and was a member of the municipal council for a while. He was also an active member of the local farmer’ cooperative, and in this capacity he helped establish the local dairy. He was trained as a schoolteacher, and held this position in his local community for forty years. After his wife, Karoline, inherited more land, they owned two farms at Modum for some time. He moved there in 1940. While most fiddlers were lacking in means, the people at Ørpen had substantial income from their land.

Truls Ørpen, too, wanted to go beyond the Krødsherad sound. Quite early, he set out to master other styles. He learnt a lot from the Telemark fiddlers, in particular Torkjell Haugerud and Gunnulf Borgen, both from Bø. He referred to Haugerud as ‘my ideal’. Through recordings and Arne Bjørndal’s collections of sheet music, he familiarized himself with playing styles from Hordaland, Voss in particular. But of the western fiddlers, Ola Mosafinn (1828–1912) was the one who intrigued him the most. During the last summer of Mosafinn’s life, Ørpen went to Voss to visit him. This trip made a lasting impression on Ørpen.

A few years later, Ørpen acquainted himself with the playing style from Numedal, and found that the style suited him well. A major influence here was Steingrim Haukjem (1897–1968) from Veggli, whom Ørpen had employed to haul timber around 1925. Ørpen wrote down some 40 tunes from Numedal and Tinn from Haukjem’s repertory, and Steingrim learnt quite a few tunes from Ørpen as well.

Drawing on the old Krødsherad sound, Sorteberg’s Telemark-flavoured playing, the traditions of Numedal and Telemark and elements of Mosafinn’s playing, Ørpen created his own, unique style. Most likely, musicologist Rikard Berge (1881–1969) had this kind of creative work in mind when he wrote of Knut Lurås and Myllarguten that they had elevated local folk music to a national art form.

Truls Ørpen met several fiddlers from Valdres, and was impressed with the playing of Nils Breitohaugen (1863–1927) from Øystre Slidre. Also, he was a frequent visitor to Hallingdal, where he held workshops. Throughout the last ten years of Ørpen’s life, Odd Bakkerud (1931–89) was an apt pupil. Ørpen had regard for Ola A. Strand (1859–1945) from Ål. Apart from this, Ørpen was mostly unimpressed with the playing in Hallingdal, although he admitted to Odd Bakkerud that Tor Grimsgard (1853–1934) must have been a talented fiddler. This led to some resentment among the Hallingdal fiddlers, particularly in Ål, although they still regarded Ørpen as an excellent performer.

It wasn’t until he was almost 50 years old that Ørpen matured into the master fiddler some people still remember from festivals and radio broadcasts. On the other hand, he retained his powers well beyond the age of 70. When playing, he always braced the fiddle against his chest. His playing was strong, sonorous and flowing. Though his rhythm was strong and firm, it seems he never played at dances. He was careful not to let ornamentation clutter the melody, but embellished his playing with tastefully applied quavers and double-stops. His bowing was nimble, with light and unexpected turns perhaps carried over from the old home-made bows, that were very light and close to four inches shorter than a regular violin bow.

There can be no doubt that Ørpen was highly esteemed by his contemporaries. Speaking of the 1932 national championship won by Gunnulf Borgen, Hallingdal fiddler Sevat Sataøen (1892–1962), who had no great liking for Truls Ørpen, stated that ‘Ørpen played best of all.’ After a championship in Hallingdal in the fall of 1945, where Ørpen had been a judge alongside Olav Moe (1872–1967) from Vestre Slidre, the judges were called upon to play a tune or two. When Ørpen played Sortebergen, ‘he took my breath away,’ Lars Skjervheim said. ‘A great tree has fallen’ were Kjetil Løndal’s words when we met in Oslo shortly after Ørpen’s death in the spring of 1958.

During his teacher training, Truls Ørpen learned to read music and gained a basic understanding of music theory. He learned to play the violin and was a member of the local chamber orchestra. But sheet music of Hardanger fiddle tunes did not exist until Arne Bjørndal (1882–1965) started printing his collections, the first of which was published in 1907. Ørpen was lent a copy by the chaplain in Krødsherad, Anders Hovden (1860–1943), who had obtained it from Bjørndal. Ørpen eagerly studied each new volume from Bjørndal to satisfy his hunger for tunes. He found Bjørndal’s transcriptions straightforward and informative, and by intense study of Bjørndal’s work he learned to play Hardanger fiddle tunes from sheet music.

When Ørpen himself started transcribing tunes, Bjørndal’s approach became a model for his own work. He transcribed all the tunes he could gather from his home district, both songs and fiddle tunes. Later on, he started transcribing music from other areas, especially Numedal and Telemark, directly from other fiddlers or from recorded performances. When tape recorders became available around 1950, he lost no time in acquiring one.

During the last few years of his life, Ørpen received a small government grant to enable him to continue collecting tunes. He left behind a substantial record collection, and his transcriptions of folk music, around 500 in all, are kept at the National Library in Oslo. When Arne Bjørndal set about compiling a major collection of Hardanger fiddle tunes around 1950, he brought in Eivind Groven (1901–1977) and Truls Ørpen as editors and collaborators. From 1954 until the time of his death, Truls Ørpen contributed to Hardingfeleslåttar I–VII (1958–81), a large work containing some 2,000 transcriptions; close to 300 of those are by Ørpen. He was directly involved in the first volume, published in 1958, and did some of the groundwork for the second volume, published the following year. At the same time, in 1956, he recorded 85 Krødsherad tunes for inclusion in Norsk Folkemusikksamling, a major sound archive at the University of Oslo. He also collected verbal folklore, especially accounts of musical practice, and supplied the University of Oslo with information on speech forms in Krødsherad. He was awarded a gold medal for merit in 1956 and and an honorary membership of the fiddlers’ union in 1953.

Ørpen started judging in championships at about the same time he started competing. Over the years he came to be regarded as a fair and knowledgeable judge, capable of supporting his decisions with theoretical arguments.

When the Norwegian Broadcasting Corporation started broadcasting folk music programmes on a regular basis, Ørpen quickly became a household name, and remained a regular contributor for as long as he was able. In all, he made around 200 recordings for the NRK, the last in 1954. He always came well prepared, and his Sunday broadcasts were held in high regard by aspiring fiddlers throughout the country. His playing was close to perfection and his introductions presented with insight and educational flair.

The quality and maintenance of folk music instruments wasn’t always of the highest order at this time. Often, fiddlers would lack sufficient means to buy first-rate fiddles and bows, and many of them lacked the skill to take proper care of their instruments beyond the most basic repair work. Strings and bows might be worn and dirty so that the playing suffered even if the instrument had been well built.

Ørpen used only four sympathetic strings, and on a Steinkjønndal fiddle that he used a lot, K.Ø. Rudi had removed the tuning-peg for the fifth sympathetic and plugged the hole.

For maintenance, Ørpen would use the fiddle-makers Gunnar Røstad and Knut Ø. Rudi, ensuring that his instruments were always in good shape. He never brought a worn or damaged instrument to a performance.

With hindsight, Truls Ørpen’s career as a fiddler has some peculiar aspects. He disliked playing at dances, thereby estranging himself from the dance circuit, which is instrumental in maintaining a living tradition. Nor, it seems, did he find talented pupils in Krødsherad.

For this reason, some fiddlers were sceptical of Ørpen, thinking him somewhat of a bigwig compared to other fiddlers who could barely eke out a living. Ørpen held his own throughout the recession of the 1920s and 1930s that left many farmers in eastern Norway in dire financial circumstances, among them a couple of his friends, both major fiddlers: Torkjell Haugerud (1876–1954), who owned a substantial amount of forest in Seljord, pulled through the crisis with great effort, while Gunnulf Borgen (1881–1953) was forced to leave the family farm Borgja, one of the largest properties in Bø.

Truls Ørpen took to playing the Hardanger fiddle when he was seven or eight years old. His first tutors were local fiddlers Johan Kleven, Anders Vinna and Wilhelm Sorteberg. In his later years, the latter would incorporate elements of Telemark style in his playing, embellishing old Krødsherad tunes to resemble the more ornate Telemark repertory. Although Sorteberg probably lost part of his local legacy in the process, Ørpen felt that the knowledge of Telemark style had released Sorteberg’s full potential.